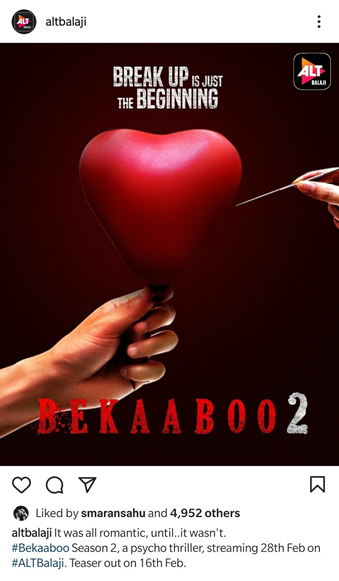 Ladies and gentlemen. Boys and girls. Presenting to you all the sizzling posters of the second season of Bekaaboo. The makers of Bekaaboo Season 2 web series have FINALLY unveiled the newly launched posters on their official Instagram page. Thank god for that! If there’s one word that can describe them, it has to be ‘EPIC.’

The recently launched posters have managed to raise curiosity among the viewers. Not only are the fans eagerly waiting for the second season but also are showering their praises on the makers. In short, the season renewal of Bekaaboo has seemed to have struck the right chords with the audience!

Fukraarahul: The most awaited web series

After the news of the arrival of Bekaaboo 2 broke the internet, fans have started coming up with different theories about the brand new storyline. Who is the lead cast? What happens to Kiyan and Kashti? What’s new with Anaysha? Kya aapke dimag mein bhi vohi sab chal raha hai? Um…okay. Let us put everything to rest. Shall we?

The newest season of Bekaaboo has left everything behind. Brace yourself as the brand new series is ready to take you on Anaysha’s journey. The second season narrates the tale of her bestselling novel and how she goes above and beyond to climb the ladder of success. After Anaysha makes it big with her book, her dynamics with every person changes!

While Bekaaboo Season 2 web series gives a peek into Anaysha’s lifestyle, it also revolves around the asli hero of the show. Inke bina toh kahani agge kaise badhegi, boss? Koi inhe kaise bhulege bhala! The second season of Bekaaboo 2 also revolves around Kiyan’s twisted ways to take Kashti and Anaysha down. He has come prepared to seek revenge from the duo in the brand new season. You’ll see!

Talking about the season renewal, Priya Banerjee was quoted saying to Pinkvilla, “The first season was a massive rage within all the age groups! It was a huge success, so the makers have made sure that the second season has way more twists and turns,”

Starring Taher Shabbir, Subha Rajput, Priya Banerjee, Ankit Gupta, and other actors, Bekaaboo Season 2 is a game of deception, revenge, hate, murder and betrayal. It is a spine-chilling journey that keeps you engrossed with unexpected twists and turns until the very end. Grab your seatbelt. Hold tight. The show is set to release on 28th February on ALTBalaji. Make haste and buy yourself an affordable subscription package today. 3…2…1…Go!!